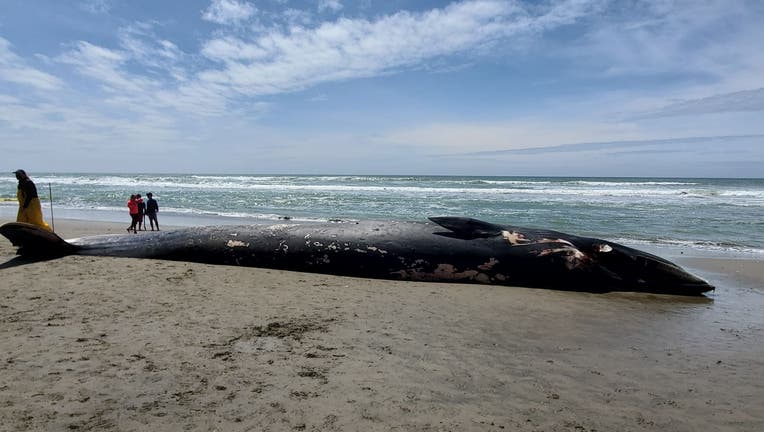 SAN FRANCISCO - Experts believe that an endangered fin whale that washed ashore in San Francisco this weekend died due to injuries sustained from a ship strike, scientists from The Marine Mammal Center said on Saturday.

They joined other scientists from the California Academy of Sciences and U.C. Santa Cruz and performed a necropsy at Fort Funston in San Francisco.

They said they discovered significant bruising and hemorrhaging to the muscle around the whale’s neck vertebrae, which they said was consistent with blunt force trauma after being hit by a ship.

The team identified the fin whale as a 46-foot juvenile male that was moderately decomposed based on the quality of its internal organs.

"Ship strikes are the biggest threat fin whales face, so this investigation helps us understand the challenges these animals face and inform decision-makers so we can safely share the ocean with marine wildlife," said Barbie Halaska, necropsy manager for The Marine Mammal Center.

The whale's death was reported to The Marine Mammal Center early Friday morning by the U.S. Coast Guard, the whale carcass was sighted a few miles offshore west of the Golden Gate Bridge.

By Friday night, the body landed at Fort Funston in San Francisco.

Although unfortunate, these deaths offer a unique opportunity for scientists to look more closely at these animals that are usually inaccessible to us, said Moe Flannery, senior collections manager of birds and mammals for the California Academy of Sciences.

The Marine Mammal Center has responded to six other fin whales in its 46-year history. Five of the six died from trauma due to a ship strike.

The fin whale is the second-largest species of whale and is listed as endangered under the Endangered Species Act.

When large vessels such as container ships are involved, the scientists said the ship's crew may be unaware they have even hit a while.