Violence erupted in Downtown Brooklyn late Tuesday during protests for the shooting death of a Philadelphia man.

NEW YORK - Hundreds of protesters took to the streets of Downtown Brooklyn late Tuesday, vandalizing NYPD cars, smashing windows, setting fires, and leaving a trail of destruction. The protests were in response to the shooting death of a Philadelphia man by police earlier this week. At least 32 people were arrested.

Five officers suffered minor injuries during the overnight violence in the area around Fort Greene Park after a woman drove her vehicle into officers as they tried to break up a protest.

Nine police vehicles were vandalized.  Video recorded at the scene showed people smashing windows on the vehicles and graffiti covering some of them.

“No justice, no peace," the crowd chanted as demonstrators broke windows of Urban Outfitters and Bank of America on Atlantic Avenue in Cobble Hill. 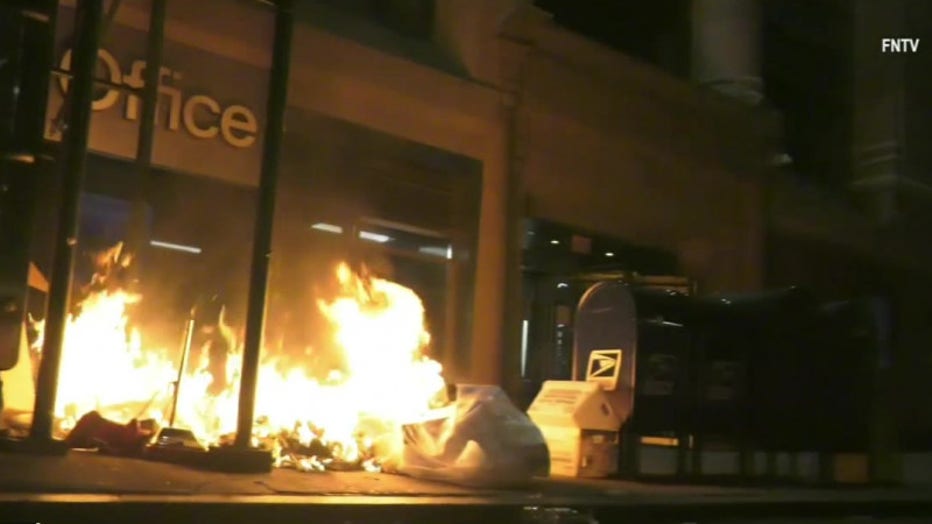 "Burn the precinct to the ground, every city, every town!” a group yelled as it marched near Boerum Place and Livingston Street.

Protests and looting continued for a second night in Philadelphia following the deadly shooting of Walter Wallace Jr. by police.

The Philadelphia Police Department increased presence across the city Tuesday and several hundred members of the Pennsylvania National Guard were deployed.

Video taken on Monday showed Wallace Jr. threatening officers with a knife before he was shot dead. His family says he was having a mental health crisis.

According to police, 30 officers were treated at hospitals after most of them were struck with rocks and bricks as they faced off with demonstrators.