Jashyah Moore of East Orange hasn't been seen for nearly a month. A $15,000 reward is being offered for information leading to her safe return.

NEW JERSEY - The family of Jashyah Moore, 14, is desperate to find her after she disappeared nearly one month ago in East Orange.

Jashyah’s mother, Jamie, says she sent Jashyah to Poppie’s Deli on Central Avenue to pick up some items on the morning of Oct. 14. When Jashyah got home, she told her mom she lost the card she was given to buy the items. So her mom told her to retrace her steps back to the deli. Jashyah has not been seen since.

The reward for information leading to her safe return has been increased to $15,000.

The Essex County prosecutor held a press conference on Wednesday afternoon to provide an update on the case.

Surveillance video from the deli shows the girl inside with a man who appears to have made the purchase for her but police believe the two may have gone separate ways shortly thereafter, investigators said.

More than 50 law enforcement members were in Orange and East Orange on Wednesday retracing Moore's steps and following up on old and new leads. They are flooding social media platforms looking for information.

The FBI is also involved.

"The FBI is here in a support capacity with our state and local partners," the FBI's Greg Takis said. "We pulled in and we're here to leverage every asset we have to help reunite a mother and her daughter."

Jashyah was to speak to authorities about a domestic violence case involving her stepfather, a former East Orange police officer who, according to News 12, was fired last month, according to her family.

Police said Jashyah’s family is cooperating with the investigation. So far, police say they have no persons of interest. 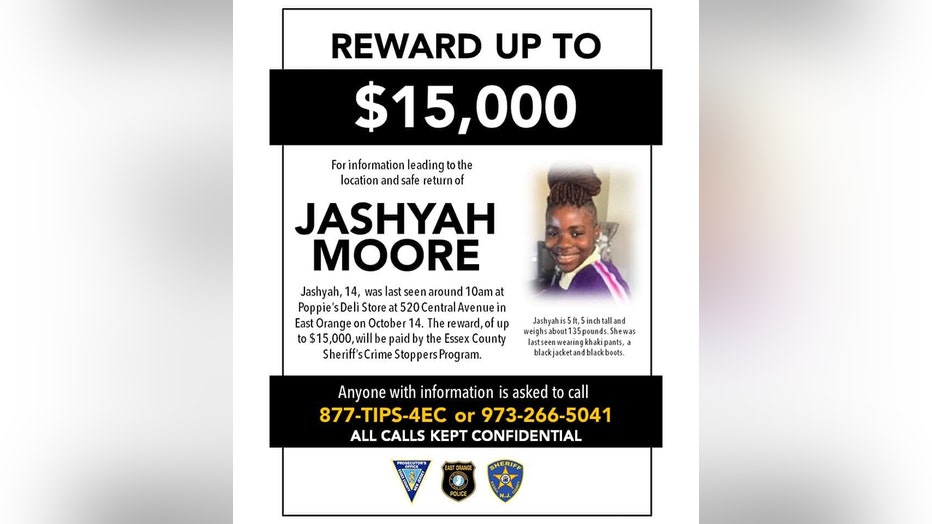 A poster offering a reward for information leading to the safe return of Jashyah Moore of East Orange, N.J.

The family of Jashyah Moore, 14, of East Orange says she has been missing since October 14 when she returned to a deli to find a card she had lost after buying items for her mother.