The Board of Elections apologized for its botched reporting of ranked choice vote tabulation and released corrected results. The race has tightened.

NEW YORK - A day after botching the reporting of unofficial results of the ranked choice voting tabulation in the Democratic mayoral primary, the New York City Board of Elections released corrected figures showing that Eric Adams and Kathryn Garcia in a close race.

The new numbers show that Adams' lead has shrunk and that Garcia's fortunes have risen after ranked choice calculations were made. In this unofficial scenario, Adams has 358,521 votes, or 51.1%, and Garcia has 343,766, or 48.9%. The race is far from over, however, because the calculations do not include more than 124,000 absentee ballots that need to be counted.

The Board of Elections released the revised data on Wednesday evening along with a statement apologizing for the blunder.

"Yesterday's ranked choice voting reporting error was unacceptable and we apologize to the voters and to the campaigns for the confusion," the Board of Elections commissioners said in the statement. "Let us be clear: RCV was not the problem, rather a human error that could have been avoided. We have implemented another layer of review and quality control before publishing information going forward."

The BOE released unofficial results on Tuesday that mistakenly included test data that wasn't cleared from the computer system.

The campaign of Eric Adams released a statement saying it was confident that Adams will prevail.

"Our campaign was the first choice of voters on Election Day and is leading this race by a significant margin because we put together a five-borough working class coalition of New Yorkers to make our city a safer, fairer, more affordable place," the Adams campaign said. "There are still absentee ballots to be counted that we believe favor Eric — and we are confident we will be the final choice of New Yorkers when every vote is tallied." 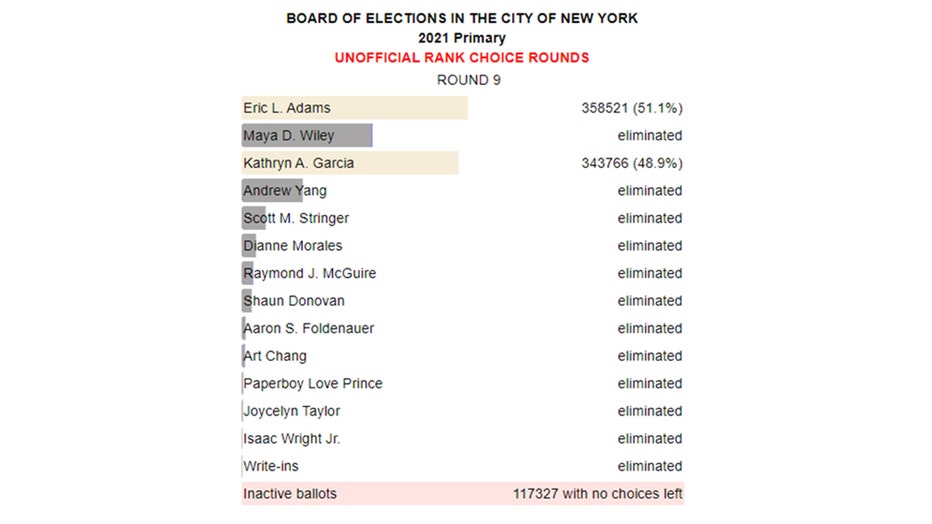 (Adapted from NYC Board of Elections)

In a statement, Kathryn Garcia's campaign urged patience until all the absentee ballots are counted and included in the ranked choice voting tally.

"Every vote is important and deserves to be counted. New Yorkers overwhelmingly voted to enact ranked choice voting and participated in it by ranking multiple candidates in our City’s first ranked-choice election," Garcia said in a statement. "Every candidate should respect the democratic process and be committed to supporting whomever the voters have selected to be the Democratic nominee for Mayor."

The BOE tabulates votes in rounds. In each round, the trailing candidate is eliminated. Votes cast ranking that candidate first are then redistributed to those voters' second choices.

That process repeats until there are only two candidates left. The one with the most votes wins.

The Democratic primary winner will be the prohibitive favorite in the general election against Curtis Sliwa, the Republican founder of the Guardian Angels.