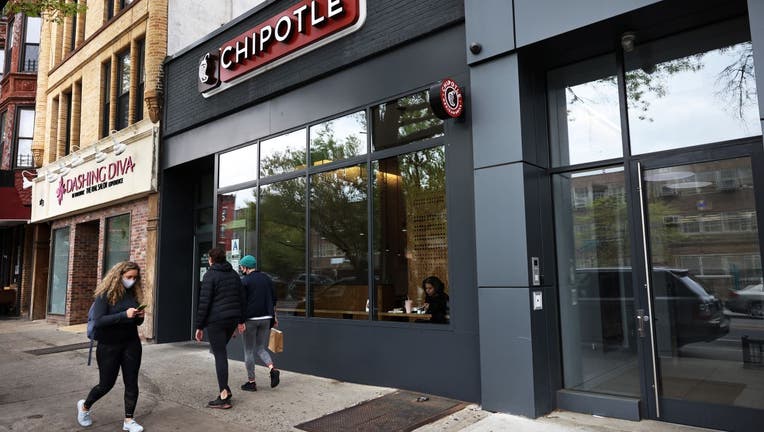 People walk past a Chipotle Mexican Grill in the Park Slope neighborhood on April 29, 2021 in the Brooklyn borough of New York City. (Photo by Michael M. Santiago/Getty Images)

Chipotle Mexican Grill Inc. says it could raise prices even further to combat any inflationary pressures that would squeeze margins.

The Denver-based burrito chain, like restaurants across the country, has over the past year grappled with higher food, labor and freight costs that are showing no signs of easing. Inflation during the third quarter was in the mid-single digits.

"We traditionally always look at how we want to approach pricing for the next year in the fourth quarter," said Chipotle CEO Brian Niccol during the company’s third-quarter earnings call on Thursday evening. "One of the things we're obviously evaluating is where is labor going to land, not just in our restaurants, but across a lot of our suppliers. We don't see wages as one of those things that's temporary and going backwards."

Chipotle has already hiked prices three times since August 2020, the most recent being a 4% increase in June to cover the cost of raising wages for its restaurant workers to an average of $15 per hour.

The owner of a chocolate store in Midtown is fighting to keep her store alive. The Polish immigrant arrived in the U.S. in the 1980s, but because of the pandemic couldn't keep paying her rent.

Restaurants like Chipotle have struggled to find help in the pandemic era despite the boost in wages as supplemental unemployment benefits, stimulus checks and child tax credits have given many the wherewithal to stay at home. A record number of job openings has given workers the upper hand over employers, which could put even further upward pressure on wages.

Higher wages aren’t the only cost pressures that Chipotle needs to worry about.

Ingredients prices are "all pressured to the upside," said CFO John Hartung. Beef prices, for example, have risen 18% this year, according to the October consumer price index.

Chipotle is also having to pay higher prices for other items that are in short supply like paper products and construction materials that are needed for new store buildouts.

Management says some of the issues, like higher freight prices, are "temporary" and that those pressures will abate as supply chain bottlenecks ease. More concerning is the impact of higher wages increases, which are permanent.

Hartung says Chipotle will "be patient and watch and see what happens with inflation" before deciding on future price increases to keep margins in check.