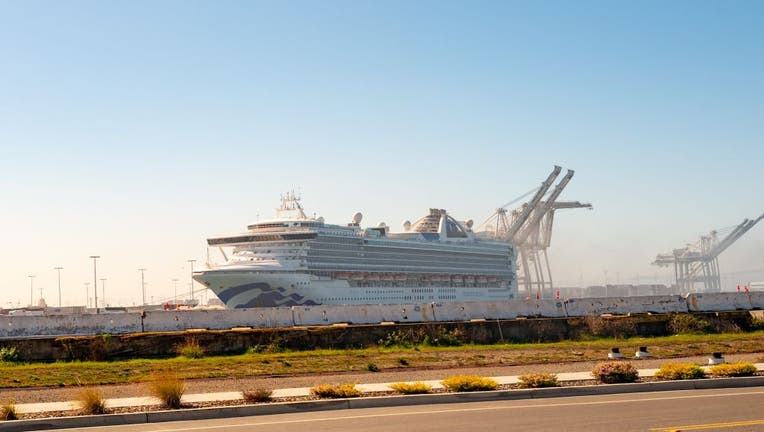 The Grand Princess cruise ship, docked at the Port of Oakland, discharges passengers exposed to the COVID-19 coronavirus in preparation for quarantines, during an outbreak of the disease in Northern California, Oakland, California, March 12, 2020. (P

OAKLAND, Calif. - The Centers for Disease Control and Prevention confirmed on Friday that all American citizens have disembarked from the Grand Princess cruise ship docked in Oakland that was stricken by COVID-19, the novel coronavirus.

“There are 14 international guests remaining on the ship who are awaiting transportation to their home countries. Once those guests disembark, the guest disembarkation process for the Grand Princess Cruise Ship will be complete,” a CDC spokesperson said.

The ship first docked in Oakland on March 9. It had been held offshore since the previous Wednesday, March 4 until government officials decided where it should dock.

KTVU has reached out to Princess Cruises to see what is next for the international passengers. Federal officials and the State Department will coordinate their disembarkation.

Approximately 2,450 have disembarked the Grand Princess as of Friday. Almost 1,000 of the ship’s passengers are Californians. Many of them were taken to Travis

Air Force Base in Fairfield for a 14-day quarantine. Some who live in Southern California were taken to Marine Corps Station Miramar near San Diego to be isolated.

Non-Californians are being taken to military bases in Texas and Georgia.

The ship’s crew has been quarantined and treated on the Grand Princess. They will remain aboard the ship as it sails “elsewhere” once it finally leaves Oakland, Governor Gavin Newsom said.

Tests kits were flown by helicopter in dramatic fashion to the ship while it was docked. Those kits were taken to a Richmond lab for processing.
The cruise line carried some 3,500 passengers in all.