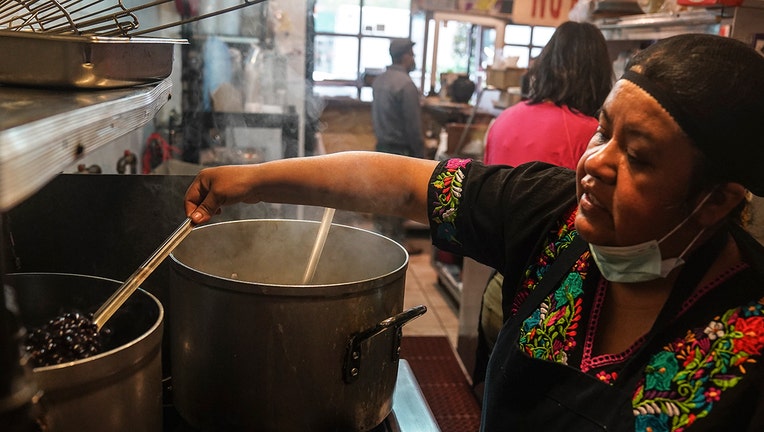 NEW YORK - The special dish at La Morada, a small Mexican restaurant in the Bronx, varies from day to day: Perhaps it's enfrijoladas, handmade tortillas covered with black bean sauce and pico de gallo. Or beef with a side salad.

One thing doesn't change: It's free.

The family-run restaurant, which opened in 2009 and has won Michelin acclaim for its Oaxacan food, has also served as a soup kitchen during the pandemic. In addition to serving paying customers, it makes about 650 meals a day for the unemployed, New Yorkers who live without gas and can't cook, older adults or the disabled.

The Mexican owners of the restaurant are activists who speak up in defense of immigrants without authorization to live in the U.S. — a sign, "No Deportations," hangs behind the door.

They describe the soup kitchen as fulfilling work.

"We always say that activism is our secret spice, so I feel like it was just very natural for us to serve the community with what we have," said Yajaira Saavedra, 32, co-owner of the restaurant with her parents. "It also goes back to our Indigenous roots when we all pitched in, gathered small ingredients and made a big pot as a meal."

The Bronx is among the areas hardest hit by the virus. When La Morada's soup kitchen opened in April, people lined up in the street and 200 soups were gone in less than an hour, the family said.

"We realized the necessity was huge. The next day, without thinking, we cooked double," said Saavedra's mother, Natalia Méndez.

The family was sickened with COVID-19 symptoms early in the pandemic, and had to close the restaurant for a month. When they reopened — with help from an online crowdfunding campaign — they started cooking for the poor, as well.

Their requests for emergency federal small business loans had been rejected due to their immigration status. The Small Business Administration says applicants for small business loans must be U.S. citizens or "qualified aliens," which includes immigrants lawfully admitted for permanent residence.

Saavedra is a beneficiary of the Deferred Action for Childhood Arrivals program, or DACA, which gives young immigrants who were brought to the country as children but never obtained legal residency the right to work and shields them from deportation.

Her parents are living in the country without authorization, having crossed the Sonoran Desert in 1992. Saavedra and brother Marco followed a year later with relatives. Marco, who also works in the restaurant, applied for asylum last year.

Before the pandemic, La Morada was a community book exchange center and had named a poet in residence. Images of protests and of immigrants demanding an end to deportations of family members decorate the restaurant's purple walls.

Today, volunteers and local service organizations, churches and businesses help distribute the food and donate ingredients, and a Brooklyn nonprofit, Rethink Food, provides key funds. The food is delivered to communities in need and to community fridges, a network of over a dozen refrigerators on New York sidewalks.

The soup kitchen runs Tuesday through Friday. On Mondays, Méndez and several helpers do prep work, cleaning and chopping lettuce, garlic, onions, tomatoes and other ingredients.

Volunteers come and go throughout the day, grabbing boxes of food to distribute. With the help of small local grants, the restaurant has even hired a few new employees.

"It is mostly the community pitching in and friends and allies just saying, 'We are going to do this, we are going to fight together and survive,'" Saavedra said.