A man rushed a stage at a lecture hall in western New York and stabbed author Salman Rushdie in the neck and abdomen on Friday. Rushdie was flown to a hospital and underwent surgery for very serious injuries.

NEW YORK - Novelist Salman Rushdie was stabbed in the neck and abdomen just as he about to give a lecture in western New York on Friday.

A man rushed onto the event stage as Rushdie was being introduced and appeared to stab him several times, according to an Associated Press reporter who witnessed the attack.

The Chautauqua Institution in Chautauqua, a town about 60 miles southwest of Buffalo, was hosting the lecture. Staff members and guests went on stage and held down the attacker until a state trooper assigned to the event took him into custody, according to the New York State Police.

A helicopter flew Rushdie, 75, to a hospital where he underwent surgery. The author's agent, Andrew Wylie, told reporters that Rushdie was on a ventilator and had suffered a damaged liver and severed nerves in an arm and an eye. Wylie said Rushdie would likely lose the eye.

Henry Reese, the event's moderator, was also hurt, police said. He was treated for a minor head injury and released. Reese, 73, is the co-founder and president of City of Asylum, an organization that offers residencies to writers facing persecution.

Police later identified the attacker as Hadi Matar, 24, of Fairview, New Jersey. He was awaiting arraignment. His lawyer declined to comment, the AP reported.

New York State Police have identified the suspect in the stabbing of author Salman Rushdie as a man from New Jersey. Hadi Matar, 24, of Fairview, Bergen County, was to be arraigned Friday evening.

State Police Major Eugene J. Staniszewski said the motive for the stabbing was unclear. He said the FBI was involved in the investigation.

On Friday evening, SkyFOX over a home in Fairview believed to be where the suspect lives. Authorities had cordoned off the area while the FBI searched the home.

Rushdie went into hiding for nine years following a fatwa that had been issued in the 1980s by Ayatollah Khomeini in the midst of widespread controversy over Rushdie’s novel The Satanic Verses.

That $3 million bounty has never been lifted.

A man rushed onto a stage and stabbed Salman Rushdie in the neck several times just before the author was to give a lecture.

"Someone who's been out there unafraid despite the threats that have followed him his entire adult life, it seems," Hochul said. "And it happened at a site that is a place that's very familiar to me. A very tranquil, rural community known as Chautauqua, Chautauqua Institution, where the most preeminent speakers and thought leaders and politicians and justices, and everyone come together to have the free expression of thought."

Novelist Salman Rushdie was stabbed in the neck as he appeared on stage at an event in western New York.

The Chautauqua Institution, a nonprofit educational organization, canceled the rest of Friday's events.

"We ask for your prayers for Salman Rushdie and Henry Reese, and patience as we fully focus on coordinating and cooperating with police officials following a tragic incident at the Amphitheater today," the Institution said in a statement.

"Chautauqua is dedicated to the exploration of the best in human values and the enrichment of life through a program that explores the important religious, social and political issues of our times," the organization states on its website.

A few hundred residents and visitors gathered at the Institution on Friday evening to pray, play music, and hold a moment of silence. 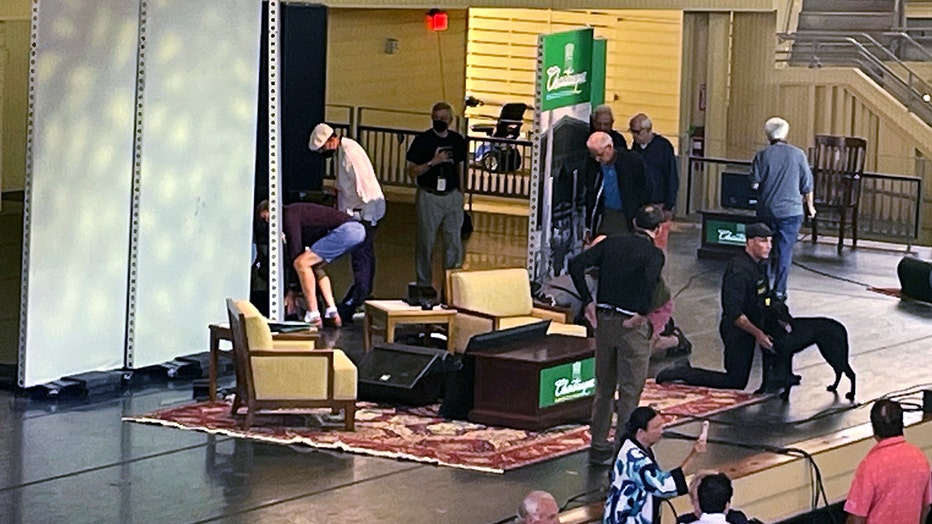 Author Salman Rushdie, behind screen left, is tended to after he was attacked during a lecture, Friday, Aug. 12, 2022, at the Chautauqua Institution in Chautauqua, N.Y. (AP Photo/Joshua Goodman)