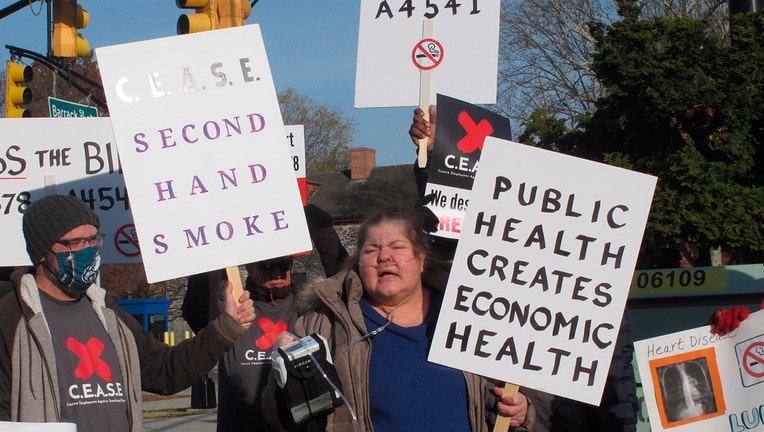 Angela Martinelli, a dealer at the Borgata casino, holds her breathing assistance device at a protest outside the state capitol in Trenton, N.J., on Thursday, Dec. 9, 2021, to call on the state Legislature to permanently ban smoking in the casinos. T

TRENTON, N.J. (AP) - Atlantic City casino workers are furious that the New Jersey Legislature is moving quickly to pass a bill giving tax breaks to the gambling halls, but not acting on a measure that would permanently prohibit smoking in the casinos.

Continuing a nearly yearlong campaign to enact a smoking ban in Atlantic City's nine casinos, about two dozen workers traveled to the state capitol in Trenton on Thursday to hold a protest urging lawmakers to pass the smoking ban bill, which has sat for over a year without action. The bill would end a narrow exemption in New Jersey's public health law that prohibits smoking in virtually all indoor places — except casinos.

"Why doesn't the state of New Jersey care about us?' asked Lamont White, a Borgata dealer who has worked in Atlantic City casinos for 36 years. "Why is the (Legislature) focused on tax cuts for the casinos rather than the health of their workers? Please, don't leave us behind in the smoke."

New Jersey actually did ban all smoking in the casinos early last year after the coronavirus pandemic broke out, on public health grounds. But the ban was lifted in July of this year, and the casinos returned to the status quo of allowing smoking on 20% of the casino floor.

"The one blessing in that pandemic is we got a break from the smoke and the cancer," said Nicole Vitola, a Borgata dealer. "There's no reason a pregnant woman should be subjected to secondhand smoke like I was in order to support my family."

She used the often-uttered words of Democratic Gov. Phil Murphy regarding his decisions on COVID-19 in her call for an end to smoking in the casinos. 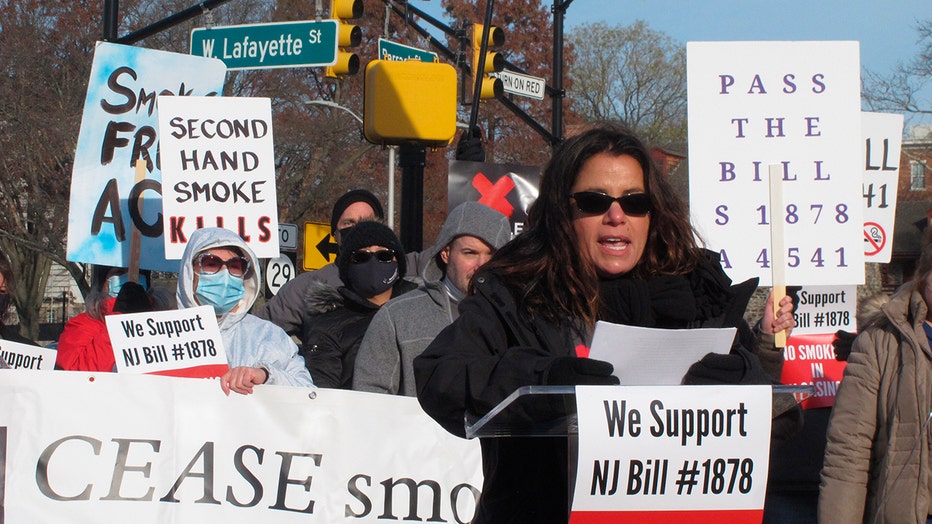 Nicole Vitola, a dealer at the Borgata casino, speaks at a protest outside the state capitol in Trenton, N.J., on Thursday, Dec. 9, 2021.

Murphy has said he will sign a smoking ban into law once the Legislature passes it.

But so far, the bill has remained stuck in committees, with no action in over a year. As recently as Monday, outgoing state Senate President Steve Sweeney said he, Murphy and Assembly Speaker Craig Coughlin need to discuss what, if anything, to do about the bill.

Sweeney repeated an oft-repeated concern of the industry that it would lose business if smoking were banned. That is the position of the Casino Association of New Jersey, the casinos' trade group.

"Some people tell you you lose 16% of your business" if smoking is banned, Sweeney said.

But casino workers point out that the Atlantic City casinos actually did better under the temporary smoking ban than they did before it was implemented.

Angela Martinelli, a Borgata dealer, held a breathing assistance device with an oxygen tube that snaked up to her nose as she participated in the protest. She said she has developed emphysema from working in the casinos.

"My lungs just kept getting worse," she said. "I'm sick of it. I'm living proof that secondhand smoke creates destruction."

The casino tax break bill could get final votes in the Legislature next week. No vote has been scheduled on the smoking ban bill, which has yet to have even a preliminary hearing in a committee since being introduced in February 2020. 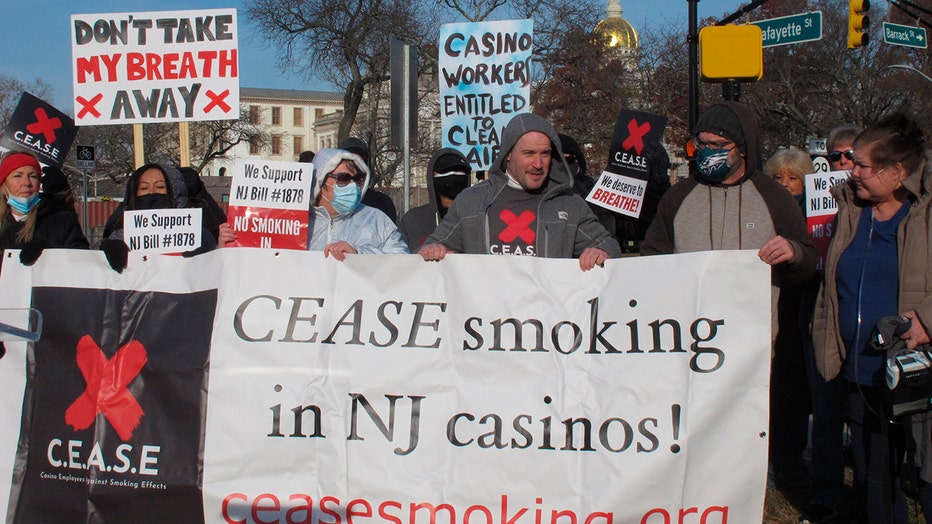