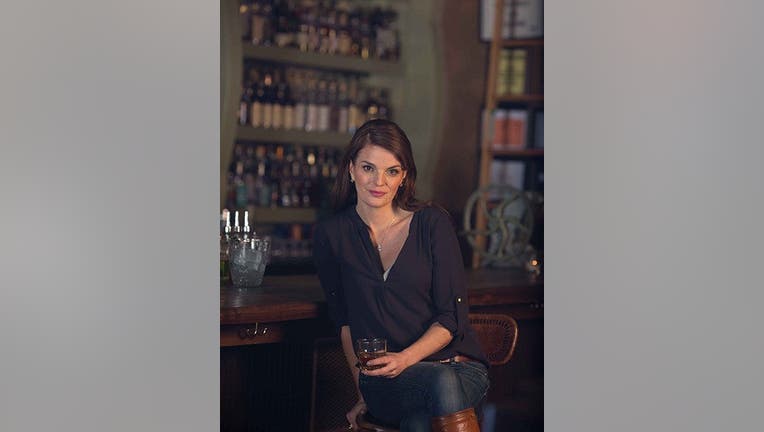 NEW YORK - More than a decade ago, Heather Greene was a musician doing the thing that a lot of artists do in New York: creating, recording, playing, touring but never quite breaking through. Then in 2005, an opportunity to move overseas -- Scotland, to be exact -- would end up changing the course of her career -- and life.

Heather got a job with the Scotch Malt Whisky Society and came to appreciate that brown spirit that is steeped in so much lore, cliché, myth, and mystery: whisky (or whiskey -- yes both spellings are used, it's complicated, don't ask, just read her book).

Heather later parlayed her early whiskey education into a career as a brand ambassador (for Glenfiddich), spirits sommelier, and whiskey educator at the Flatiron Room in Manhattan, where for a time she served as director of the Whiskey School and now continues to teach sold-out classes once a month or so.

Last fall, her book "Whisk(e)y Distilled: A Populist Guide to the Water of Life" (Viking Studio) was released. She is fast becoming a go-to person for dispelling fears and myths about the booming whiskey industry (forget vodka, everyone wants to be Don Draper).

I met Heather at the cafe inside Word book store in Jersey City. We sat at a circular table just in front of a bookshelf labeled "Booze," whence a copy of her book kept watch over our conversation. I asked her about her career, the book, the state of distilling in these United States, and -- yes -- even about that monumentally successful sweet-and-spicy-flavored-whiskey-product-thingy called Fireball*, which bar hoppers cannot seem to escape no matter how hard they try.

1. Spirits distilling has exploded in the United States. New York has been part of that boom. Is this a good thing or does it also mean a lot of crappy whiskey is being made?

HEATHER: I think it's wonderful and I am such a huge supporter of small distilleries sprouting up and doing their best to create amazing, lush, mouthwatering spirits. Some succeed better than others. For the most part, especially in the New York region, I haven't met very many cynical or untalented whiskey makers. Those that are actually making whiskey are passionate about it. That passion is reflected somehow in the beautiful glass of whiskey or gin that you might have. It might not be exactly your taste because it's a challenge when you're small distillery -- you don't have the economies of scale, you don't have the same resources, you don't have an inventory, for example, of aged spirits that you can vat or batch together. I look for the ones with a good story, a lot of heart. I'm not going to compare a small local distiller to a distillery that's been around since 1886 and has that long history behind it.

"Whiskey is a hand sell."

2. What do you say to whiskey skeptics -- those misguided folks who say dumb things like "I only drink vodka so I don't get a hangover" and "whiskey tastes like gasoline"?

HEATHER: Those are the easiest people to convert because I surprise them by finding a whiskey that suits their palate. For every palate out there I can find a whiskey that matches it. What is a more challenging proposition, though, is the whiskey drinker who already has preconceived notions about how you're supposed to drink whiskey, what their brand affinity is, they have myths like older is always better, you can't have it in a cocktail, bourbon can only be made in Kentucky (it can be made anywhere in the U.S.) -- these are the harder minds to change than the completely new person who is "Okay, you know what? Show me, I'm open."

3. What kinds of challenges have you, especially as a woman, faced in this career?

HEATHER: The question of being a woman in this industry runs very deep. It's a very much more complex topic that I've been trying to understand myself. I think I'm existing in a bigger cultural fabric about gender issues, about women having a voice in anything. I think there's going to be naysayers -- that is not just unique to me and whiskey. Women in technology, women authors who can't write books without the word "Woman" in front of it. For example, people are constantly saying "Oh you're a woman whiskey author" or a "woman whiskey specialist." I think you have to hit the ball little bit harder than the men. As many things that have been painful being a woman in this industry there's also been upside. It's a curiosity, and it opened doors because people are curious to peek and see what's happening there.

"For every palate out there I can find a whiskey that matches it."

4. How did this book come about: what or who prompted you to write it?

HEATHER: About three years ago, people would say to me "Why don't you write book?" So I knew that there was interest in this sphere. Here in Jersey City at a [neighbor's] cocktail party in my brownstone, I met an agent. And we hit it off. He loves whiskey, he saw my whiskey closet, which is hugely extensive with all these amazing vintage whiskeys from years of collecting beautiful bottles. He was "Wow, this is the real deal -- let's do this." The next day he said "Can you come in for a meeting? We'd like to represent you."

5. /Winking/ Are flavored whiskeys -- like Fireball Cinnamon Whisky -- the work of the Devil?

HEATHER: I am doing my utmost best to get out into the public and teach people about the beauty and virtue of whiskey on its own. I am terrified of Fireball whisky and cheaply flavored whiskeys because I think what it will do is distract the industry. We have a danger of basically cheapening the beauty and the craftsmanship that go into a well-made whiskey. In terms of the palate, maybe somebody would like a cinnamon-flavored whiskey -- that I don't argue with. I think the analogy would be like flavored vodkas when it got out of control with whipped cream and peanut butter and jelly. And it cheapens the category. If I could get my hands on every single person in the world who is curious about drinking Fireball and introduce them to whiskey the way I like whiskey I'm sure I could convince every single Fireball drinker to drink a whiskey the way I like whiskey. It just takes time. Whiskey is a hand sell. I don't want to start all of a sudden seeing Cheerios-flavored whiskey, or Froot Loops-flavored whiskey or marshmallow whiskey because I think that will jump the shark and someone like me and all the people who are passionate about it are going to have to fight hard to show that there's quality in whiskey, and I think that could backfire on the entire industry.

* Fireball is one of the most commercially successful booze product launches. The ridiculousness of the concept seems to be part of the marketing. Just days prior to this interview I brought a bottle of Fireball and a bottle of Irish cream to a friend's game-night party and made creamy Fireball shots for everyone to (ironically?) enjoy. (The shots were a hit. Oh well.)

Learn about her book