The hospitality industry is facing a labor shortage as many companies can't find workers to staff jobs.

LOS ANGELES - The number of summer jobs for teens amid the COVID-19 pandemic in 2020 plummeted to its lowest level since the Great Recession, according to a recent study from the Pew Research Center.

Pew observed monthly average employment rates from the Bureau of Labor Statistics (BLS) for June, July and August 2020 among 16- to 19-year-olds and found less than a third (30.8%) of U.S. teens had a paying job last summer.

"As recently as 2000, more than half (51.7%) of U.S. teens could expect to spend at least part of their summer vacation lifeguarding, selling T-shirts, dishing up soft-serve ice cream or otherwise working for pay," Pew said. 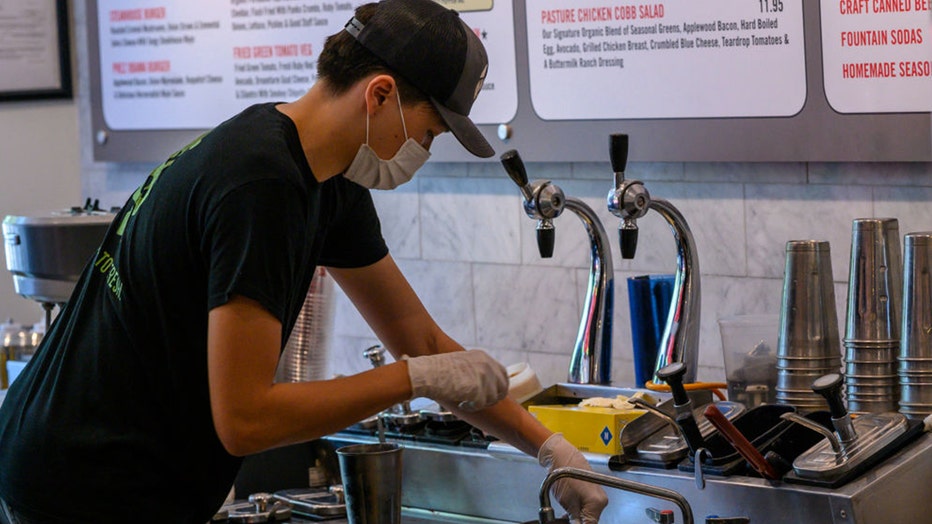 FILE - An 11th-grade student is seen at work in a fast-food restaurant in Arlington, Virginia, on June 6, 2021.

The drastic drop in employed teens was mostly due to the height of the COVID-19 pandemic when businesses were shuttered and vaccines were still being developed.

"The COVID-19 pandemic, and the economic restrictions imposed to combat its spread, upended the teen job market just as it did the broader job market. About 1.9 million 16- to 19-year-olds lost their jobs between February and April 2020," according to Pew.

While the pandemic did play a significant role in lowering the chances for teens to find summer employment in 2020, previous trends also suggest that the numbers have been gradually going down since 1998, Pew said.

"The teen summer employment rate edged higher throughout the 2010s but never quite returned to pre-recession levels," according to Pew.

Some factors impacting the lower numbers of teens seeking summer employment are due to fewer entry-level jobs, more schools ending later in June and/or restarting before Labor Day, more teens taking classes over the summer, prioritizing doing volunteer or community work as part of their graduation requirements and more students taking on internships, which the BLS does not categorize as employment, Pew said.

The types of jobs teens apply for during the summer have seen a slight shift as well.

For instance, about 35.1% of teenagers worked in the food and hospitality industries and only 24.5% worked in retail, no doubt due to the increase in online shopping, according to Pew.

It is likely the decrease in teens seeking summer employment will continue, according to Pew.

RELATED: Could we see a fourth stimulus check? Where payments stand

Meanwhile, overall job trends are strengthening with over 40% of Americans fully vaccinated. The number of people applying for unemployment benefits has decreased. Jobless claims fell by 9,000 to 376,000 from 385,000 the week before, the Labor Department reported Thursday.

Businesses are reopening rapidly as the rollout of vaccines allows Americans to feel more comfortable returning to restaurants, bars and shops. The Labor Department reported Tuesday that job openings hit a record 9.3 million in April. Layoffs dropped to 1.4 million, lowest in records dating back to 2000; 4 million quit their jobs in April, another record and a sign that they are confident enough in their prospects to try something new.

In May, the U.S. economy generated 559,000 million new jobs, and the unemployment rate dropped to 5.8% from 6.1% in April. Many economists expected to see even faster job growth. The U.S. is still short 7.6 million jobs from where it stood in February 2020.