The second group of 15 winners of $50,000 were drawn Friday, including some people living right here in the Bay Area. KTVU's Ann Rubin reports.

The winners are not identified by name, only by county, unless winners give their permission to reveal their identities.

Winners, who received at least one vaccine shot: were picked from these counties on Friday: San Francisco, San Mateo, Alameda and two from Santa Clara, along with Monterey, Sacramento, San Diego, Orange, Riverside, Kern, Fresno and three from Los Angeles.

One guy named "Tony" was one of the winners and Gov. Gavin Newsom tweeted a video about him.

And on Friday for the first time, Gov. Gavin Newsom introduced another one of last week's winners by first and last name: 17-year-old Nancy Gutirrez of Vista in San Diego County.

Since she's not 18, the money will be put into a savings account for her until she becomes old enough to claim it.

"I was really excited," the teen said, saying she got vaccinated in May. "I have more liberty with going outside."

Her father is a landscaper and her mom stays home to help her and her two brothers.

When her mom got the call, both were surprised to hear the news. 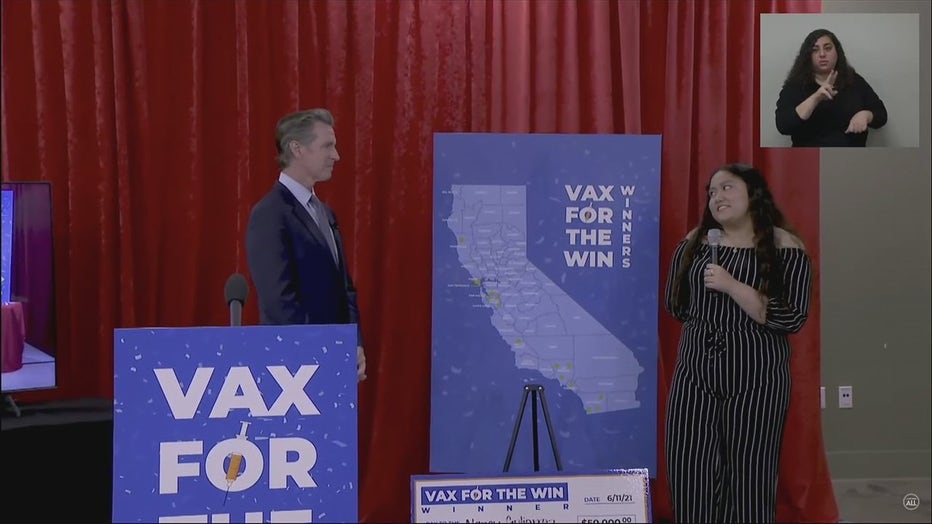 "Nancy, you won't believe it," she recalled her mom saying.

It's a good thing that her mom picked up the phone.

That's because last week, two of the 15 winners from San Diego and Santa Clara counties did not respond to the California Department of Public Health's phone calls, emails and texts, and therefore, forfeited the $50,000, according to health department spokeswoman, Sami Gallegos.

Two alternates were then called. One from Monterey County answered the call and state officials reached the Sacramento County winner on Friday.

The health department said it will try to contact winners for up to 96 hours after the drawing, "after which time they may no longer be offered a prize and another person may be selected for the prize from the pool of eligible persons."

As of Friday, Newsom said California had vaccinated 40 million residents, roughly twice the number of those vaccinated in Texas and Florida. Put another way, about 70% of state residents age 18 and older have received at least one dose, he said.

Newsom added that California has the lowest COVID case rate in the nation.

The big lottery day is Tuesday when California reopens and 10 vaccinated Californians have a chance at winning $1.5 million each.

In all, California will spend $116.5 million on the "Vax for the Win" lottery and $50 retail and grocery store gift cards.

Winners must complete their vaccination in order to claim their prize.

If someone under 18 wins, the cash will be put in a savings account for them until they turn 18.

For more information about Vax for the Win, please visit https://covid19.ca.gov/vax-for-the-win.