WASHINGTON - Law enforcement officials in the U.S. and Europe have arrested 150 people and seized more than $31 million in an international drug trafficking investigation stemming from sales on the darknet, the Justice Department said Tuesday.

The arrests are connected to a 10-month investigation between federal law enforcement officials in the U.S. and Europol in Europe. Prosecutors allege those charges are responsible for tens of thousands of illegal sales in the U.S., the United Kingdom, Australia, Bulgaria, France, Germany, Italy, the Netherlands and Switzerland.

The Justice Department says investigators have seized over $31.6 million in cash and virtual currency and 45 guns.

The darknet is a part of the internet hosted within an encrypted network and accessible only through specialized anonymity-providing tools, most notably the Tor Browser. 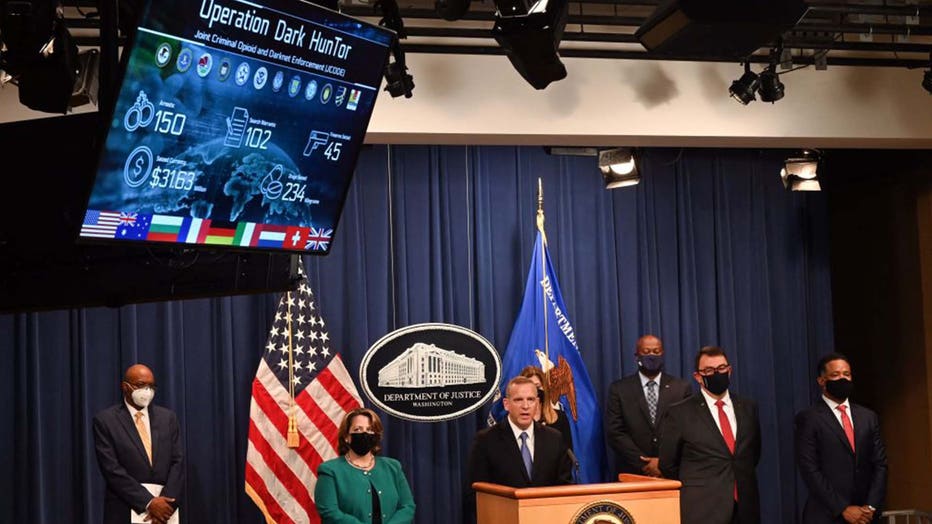 FILE - FBI Deputy Director Paul Abbate speaks about Operation Dark HunTor, a joint criminal opioid and darknet enforcement operation, during a press conference at the US Department of Justice in Washington, DC, on Oct. 26, 2021.

Investigators also recovered a slew of illegal drugs, including counterfeit medication and opioid pills, along with more than 152 kilograms of amphetamine, 21 kilograms of cocaine and 32.5 kilograms of MDMA, according to prosecutors.

Those arrested include 65 people in the U.S., 47 in Germany, 24 people in the United Kingdom, four in Italy, four in the Netherlands, three in France, two in Switzerland and one person in Bulgaria.

The operation was specifically designed to target "drug distributors who use the darknet to traffic these illicit drugs and items like pill presses, which are fueling the ongoing opioid crisis plaguing our communities," Monaco said.

The Justice Department said its investigation was ongoing and investigators were still working to identify other individuals behind darknet accounts.

While the Justice Department has carried out similar investigations in the past, investigators were particularly concerned when they started seeing a surge in opioid sales on the darknet during the pandemic.

"Since the onset of the COVID-19 pandemic, more people have turned to the darknet than ever before to buy drugs," Monaco said.

"Before I close, I want to address those who remain on the darknet, those who are peddling illegal drugs and thinking they are safe behind layers of digital anonymity. My message to you is simple: There is no dark internet. We can and we will shine a light," Monaco said.