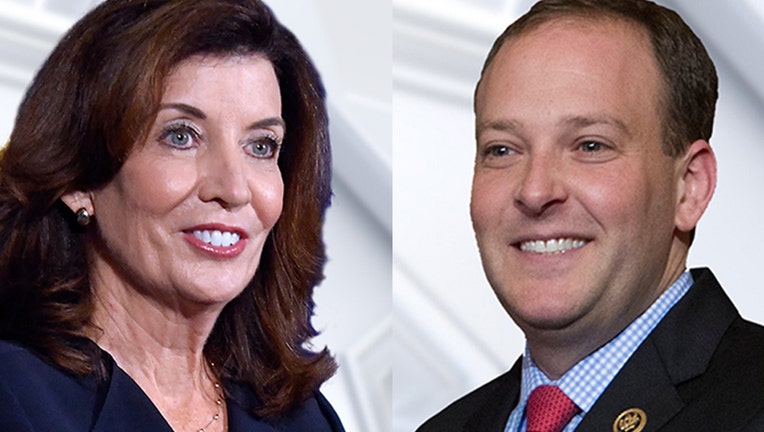 NEW YORK - Gov. Kathy Hochul is pulling ahead slightly in the race for governor of New York, a new Siena College poll shows.

With less than 6 weeks until the general election, Hochul's lead over her Republican opponent Rep. Lee Zeldin went up slightly to 54-37% compared to 53-39% in August.

Hochul was also able to hold her base, garnering 81% of support from Democrats, which is the same percentage as last month. Zeldin's support among Republicans dropped from 84% in August to 77% in September. Zeldin does lead narrowly with independent voters, 45-42%.

"Zeldin's narrow lead among independents is both good — it's a lead — and bad — it's narrow, 42%," Siena College pollster Steven Greenberg said. "To close or even narrow a 17-point gap, he would need to win a far greater share of independents, solidify Republican support, as well as pick off some more Democrats."

Hochul's favorability rating stayed relatively the same, 47-40% this month compared to 46-41% in August. However, 23% of Republican voters say they view Hochul favorably, a jump up from 16% last month.

Zeldin has a negative favorability rating, 31-33%, while 36% of likely voters do not have an opinion about him.

Hochul has a hefty lead over Zeldin among New York City voters, by 70-20%. Hochul also won more support among suburban voters, leading by five points after trailing there by three points in August. Zeldin is leading among upstate voters by 45-44%.

According to 50% of likely voters surveyed for the poll, the top two issues facing New Yorkers as they head to the ballot box in November are inflation and the cost of living. This is followed by around 34% who say threats to democracy is a top concern and 29% who say crime is their number one issue.