Gov. Kathy Hochul's lead over Rep. Lee Zeldin in the race for New York governor has narrowed according to a new poll.

NEW YORK - It is becoming a tight race with for the 2022 election for New York governor.

Governor Kathy Hochul has a ten point lead over her Republican challenger Congressman Lee Zeldin, according to a new Marist College poll, drawing 51% to Zeldin's 41%.

But among voters who say they are definitely voting in the election, Hochul’s link shrinks to just 8 points, with the margin changing to 52% for Hochul and 44% for Zeldin. 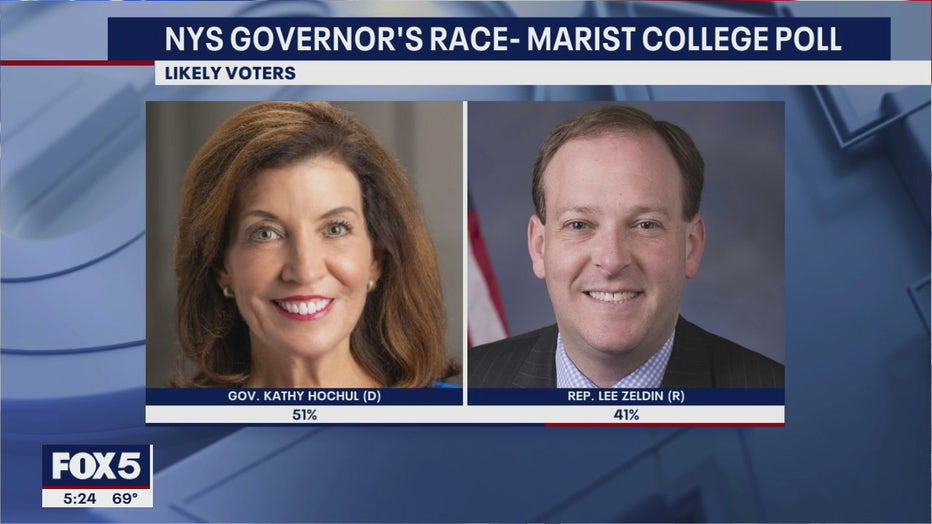 Zeldin’s support also shot up among independents, now with a lead of 49% to Hochul’s 35%.

In the suburbs, Zeldin and Hochul are in almost a dead heat, Zeldin drawing 50% and Hochul receiving 47%.

Hochul still has a hefty head though in New York City with 65% compared to Zeldin’s 23%.

"If you’re the Hochul team right now, you're saying turnout, turnout, turnout," Jay DeDapper with the Marist College Poll explained. "If they're seeing the numbers we're seeing, that New York City voters are the least enthused, her team's got to figure out a way to enthuse New York City voters about this upstate Democrat who's an incumbent, but hasn't been in office for very long. For Lee Zeldin, what he's doing is working, but is it enough to turn the tide in a very Democratic state? He probably needs to peel off some Democrats and he certainly needs to keep the independents who have flipped his side."

The Marist College poll also found that a the biggest issue for voters is inflation with 28%, saying that is their top concern heading into November's election, followed by preserving democracy with 24%, crime at 18%, and abortion rights at 14%.

The poll of 1,117 registered voters was conducted from Oct. 3-6. It has a margin of error of 4 percentage points.