What is genetic genealogy, a tool reportedly used to help capture the suspect in the Idaho student murders?

The arrest of 28-year-old Bryan Kohberger in connection with the murders of four University of Idaho students in November 2022 has cast a spotlight on a particular tool authorities used to track Kohberger down. We're taking a look at genetic genealogy.

PHOENIX - The arrest of 28-year-old Bryan Kohberger in connection with the murders of four University of Idaho students in November 2022 has cast a spotlight on a particular tool authorities used to track Kohberger down.

Kohberger was arrested on Dec. 30 in eastern Pennsylvania. According to officials with Washington State University, Kohberger was a PhD student in the school's criminal justice program, and had completed his first semester earlier in December.

There are reports that a break in the murder case came after a process called "genetic genealogy" was used.

Here's what you should know about genetic genealogy.

What is Genetic Genealogy?

According to a research guide published on the Library of Congress' website, genetic genealogy creates a profile of biological relationships between or among individuals using DNA test results, in combination with traditional genealogical methods.

How does it work?

What is it normally used for?

According to the article published on Genealogy Explained's website, genetic genealogy is used to help determine a person's ancestry and genealogical origins via DNA tests.

"These tests compare the results of a DNA test with those already tested by others in order to determine genetic similarities and provide information about how closely people are related," read a portion of the website.

The website also states a number of companies that offer DNA testing for genetic genealogy, including some rather well-known brands like AncestryDNA and 23andMe.

How is Genetic Genealogy used to solve crimes?

According to a 2022 article published on Genealogy Explained's website, a method they call Investigative Genetic Genealogy or "forensic genealogy" has been used to identify suspects in a criminal case.

A September 2022 report published by the Forensic Technology Center of Excellence details the process of what they call Forensic Genetic Genealogy. The report states that searching DNA profiles against the FBI's Combined DNA Index System (CODIS) may not always yield probative, or substantiating matches.

"When a search does not result in a CODIS match, forensic science service providers may identify leads using Forensic Genetic Genealogy," read a portion of the report.

According to the report, Forensic Genetic Genealogy uses profiles of commonly occurring genetic variations across individuals known as SNPs. After an SNP profile was generated, the profile is uploaded to law enforcement-specific genetic databases to compare a case sample against available profiles that have been uploaded by other consenting individuals.

"The similarities between the case sample profile and consenting individual profiles can help law enforcement identify individuals who are related to the sample of interest," read a portion of the report.

The investigative leads, according to the report, are later confirmed with additional DNA analysis.

Is this the first time Genetic Genealogy was used to solve a crime?

In recent years, at least three cases in California and Arizona involved the use of Genetic Genealogy.

In 2018, our sister station KTVU in the San Francisco Bay Area reported the arrest of Joseph James DeAngelo in connection with the Golden State Killer cases. DeAngelo, according to then Sacramanto County District Attorney Anne Maria Schubert, was arrested after a DNA sample came back as a match to the Golden State Killer.

In an article published by the Associated Press, it was stated that police zeroed in on DeAngelo by using genealogical websites to identify potential relatives of the killer based on DNA collected at a crime scene

DeAngelo was eventually arrested after investigators collected trash from cans left outside DeAngelo's home, and a piece of tissue from the trash proved to be the piece of evidence they needed to obtain an arrest warrant, according to court documents.

In June 2020, DeAngelo pleaded guilty to 13 murders and 13 rape-related charges under a plea deal that avoided a possible death sentenced. He was sentenced in August that same year to multiple life sentences.

The Canal Killings in the Phoenix area was another case that featured the use of Genetic Genealogy.

The Canal Killings refer to the murder of two women in the 1990s in the Phoenix area. The suspect in both cases, Bryan Patrick Miller, was linked by DNA findings to the deaths of Angela Brosso in November 1992, and Melanie Bernas in September 1993.

"That was the first case solved ever, using forensic genetic genealogy in 2015. That identified Bryan Patrick Miller as the suspect in that case," said Genetic Genealogist Colleen Fitzpatrick.

Fitzpatrick also had a role in the investigation of Allison Feldman's murder.

Feldman was killed in 2015 at her home in Scottsdale. Court documents revealed graphic details about the murder. Feldman's murderer allegedly strangled her, beat her, and sexually assaulted her. The suspect allegedly used bleach or chlorine to clean up the gruesome scene, but a large pool of blood remained.

"This case was one of the worst scenes that I've been to," said Scottsdale Police Detective John Heinzelman.

Investigators utilized Genetic Genealogy in the case by using a DNA profile from the murder scene to find a partial match to a first-degree relative. That relative turned out to be the suspect's brother, Mark Mitcham, who was serving time in an Arizona prison.

"Using Y-DNA matched to the genetic genealogy databases, I came up with the name Mitcham," said Fitzpatrick.

The suspect himself, later identified as Ian Mitcham, was arrested at his workplace in April 2018.

What does the future hold for this technology?

Currently, Fitzpatrick says Genetic Genealogy is considered an investigative lead, but she says in the future, it could play an even bigger role in criminal investigations.

"I think In the near future, it will be the evidence that will determines the outcome of the case," said Fitzpatrick.

What are critics saying about Genetic Genealogy?

Critics of Forensic Genetic Genealogy have focused on matters of privacy.

"In submitting our DNA for testing, we give away data that exposes not only our own physical and mental health characteristics, but also those of our parents, our grandparents and, as in [Joseph James] DeAngelo’s case, our third cousins — not to mention relatives who haven’t been born yet," read a commentary authored by ACLU Speech, Privacy and Technology Project staff attorney Vera Eidelman, in 2018.

A lawsuit filed by the group Legal Aid Society against the New York State Division of Criminal Justice Services in 2018, meanwhile, contended that people of color faced a higher risk of being investigated through familial DNA searching because the majority of DNA information in the state’s databank is from people of color, and that the state did nothing to restrain police overreach or give recourse to people subject to suspicion less searches.

What are government officials doing in response?

In September 2019, the U.S. Department of Justice announced a number of interim policies regarding what they call "emerging method to generate leads for unsolved violent crimes."

One of the sections in the Interim Policy on Forensic Genetic Genealogical DNA Analysis and Searching, titled "Investigative Caution," states that investigative agencies "shall not arrest a suspect based solely on a genetic association generated by a [Genetic Genealogy] service."

"Traditional genealogy research and other investigative work is required to determine the true nature of any genetic association," a portion of the policy reads.

What about genetic testing firms? What are they doing about privacy?

On 23andMe's website, it is stated, in part, that if the company is required by law to comply with a valid court order, subpoena, or search warrant for genetic or personal information, company officials will notify those affected through the contact information they provided before the information is disclosed to law enforcement, unless doing so would violate the law or a court order.

AncestryDNA's website states they do not voluntarily cooperate with law enforcement in regards to requests for user information.

"To provide our Users with the greatest protection under the law, we require all government agencies seeking access to Ancestry customers’ data to follow valid legal process and do not allow law enforcement to use Ancestry’s services to investigate crimes or to identify human remains," read a portion of the website.

What do Americans think about Investigative Genetic Genealogy?

According to an article published by the Pew Charitable Trust in 2020, Americans are divided on whether police should use Investigative Genetic Genealogy to solve crimes.

Citing figures from a survey done by the Pew Research Center, the article states that 48% of the over 4,200 U.S. adults surveyed say they were OK with DNA testing companies sharing customers' genetic data with police, while a third said it was unacceptable. The survey was done in June 2019. 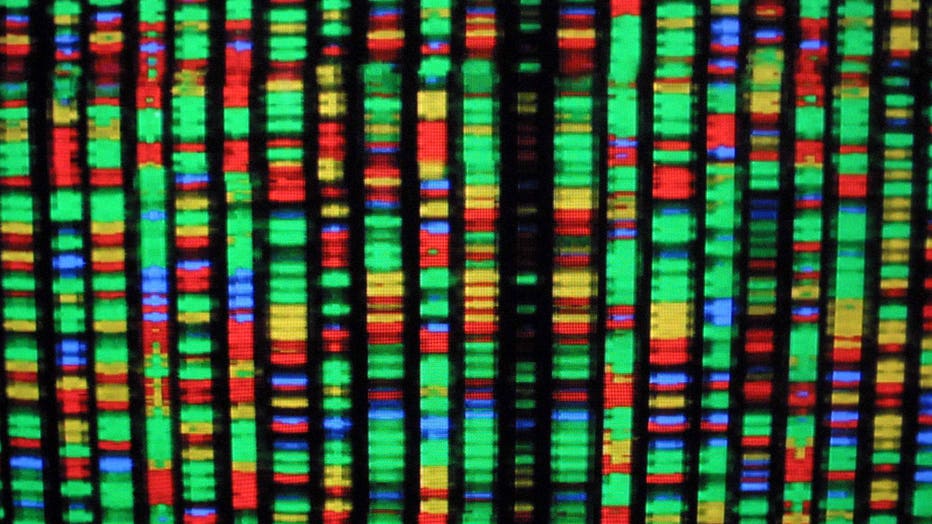 A digital representation of the human genome. (Photo by Mario Tama/Getty Images)