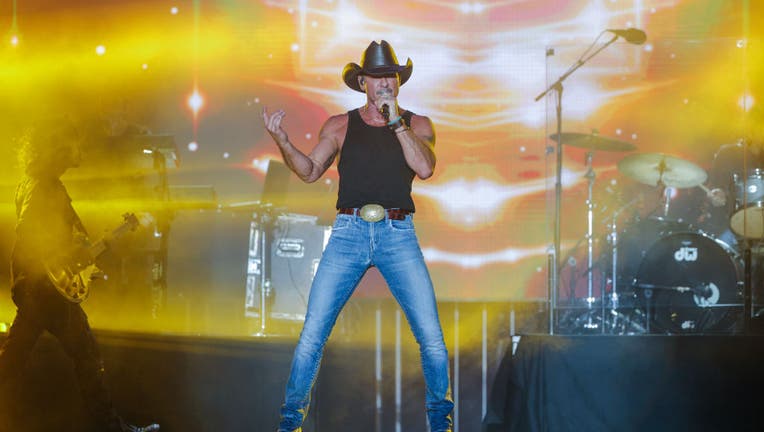 Tim McGraw accidentally took the whole "Just To See You Smile" thing a little too far at his Arizona concert this weekend when he fell off the stage while performing one of his hit songs.

While singing his song, "I Like It, I Love It," at the Boots in the Park concert, the country crooner had almost too much rhythm while trying to recover from kneeling on the stage then moving into a squat position and subsequently allowing himself to tumble back into the crowd.

In videos captured by fans, the 55-year-old tries to maintain his balance when he eventually just gives in and falls backward.

McGraw seemed to recover quickly as he hops back up to greet more of his screaming fans.

The incident comes the same weekend as rapper Post Malone fell through a hole on his stage, injuring himself.

@whodis88 Helluva concert good ol @timmcgraw put on last nt. Glad he was ok and was up meeting the crowd. #timmcgraw #dadsoftiktok #navajonation #navajotiktok #bootsinthepark #tempeaz #arizona #countrymusic #foryou #xyz123 ♬ I Like It, I Love It - Tim McGraw

This isn't the first time McGraw has had a scare of his own accord. In 2018, McGraw had to get medical treatment after collapsing at a show in Ireland.

It's unclear if the singer and "Yellowstone" actor's wife, country star Faith Hill, was in attendance at McGraw's Sunday performance.